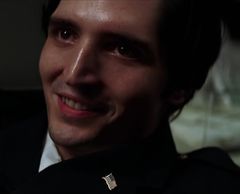 Looking for a gift from one of the Gaian Garou tribes? He has access to all Gifts up to Rank 4, and is willing to teach.

Camp/house/lodge gifts aren't available, but nearly everything else is game.

Can also let you use any Garou or Fera Gift he has access to as an XP-free oneshot, if you have the rank for it.

Press-ganged before I could talk. But the company's nice.

I -hate them-! Bunch of jackbooted fucks! Everything's as bad as it is because of their New World Order. Go ahead and laugh at the paranoid schizo raving about the Illuminati, but I know what happened to me!

Hey, if Helios hates you more than he does me, that makes you all right in my book! And that Kiss of yours...I, uh, I really miss that.

How do the other changers stand it? Having a bunch of alien things in another dimension watching you, all the time, 24/7. Keeping you in line by deducting merit points when they don't like what you do. Having promotion or punishment depend on their constant surveillance.

Did I say things were bad because of the NWO? No, it's these people. If Little Brother's too stupid to know he's bigger than Big Brother, he deserves everything that happens to him!
Klaus -- My old boss. He was a true visionary. I'd take another bullet for him, oh yes I would.

Fell -- Klaus' brother. A headshrinker. I still got a migraine from that orbitoclast you stabbed into my eye socket. But you could be kind, too. And when you were, it always seemed like you were the only source of kindness in the world.

Hamish -- Another damned headshrinker. My psychiatrist. Would probably get along with Fell, but I don't want to think about that much. And no, I do -not- want to see your fucking mask! But, uh, I do wanna be your number one guy...We've got a lot of history, and I work for him now.

Carver -- A weirdo I used to live with. Part teen Mansonite, part Stepford wife. He's working for the Technocracy, but no one will believe me about it.

Russ -- Gods, those eyes of his! Beautiful. Also a Theurge that knows his stuff. Quis custodiet ipsos custodes? This guy says he does. At least where spirits are concerned. Challenged for the Hive's Master of the Rite and won.

Lincoln & Carys -- A pair of local Sabbat that Doc used to have dealings with. Ran or run a tattoo parlor catering to non-mortal clientele with Patrick.

Kurt -- Another pretty-eyes. A pyromaniac that smokes more than I do, and maybe thinks I'm pretty. Or maybe he's just laughing at me.

Patrick Harrison -- He has a head on his shoulders. More dangerous than his business partner and Carys, I think. And if he's not exaggerating about that fleshwarping stuff-- ugh!

Pax -- One of those wolfy kin with magic, mainly focusing on enchanted items. He's useful and damnedly gregarious, thinking he's got everything under control. But does he? Looks pretty in a dress, anyway.

Raquel -- So, uh, you'll let me come back to company HQ, right? Right?

Brigette -- Met under strange circumstances. Have a surprising amount of rapport, but if she's an Enticer, maybe that's just the nature of the beast. What does she want with me? I like her pretty words.

Ramona & Izayah -- Sometimes the one that kills you last is the one that makes you suffer the most.
Retrieved from "https://cityofhopemush.net/index.php?title=Thomas&oldid=225403"
Categories: