Ananasi are werespiders, one of the surviving Changing Breeds of the world who refer to themselves as Damhàn.

The Damhàn view themselves as children of Queen Ananasa, an ancient and powerful spider spirit created by the Weaver itself (and theorized by some to be a backup and under-powered copy of the original Weaver), whose will is their law. They seek to restore the original balance of the Triat. Ananasa is patron and totem to the entire breed although some splinter traitorous groups (the Kumo and Kumatai) have abandoned her.

Unsurprisingly, the Ananasi possess many advantages of the spiders. At will they can secrete pheromones to attract mates[2], they possess venom glands (although the potency of this venom varies according to the species of spider they take after and the form they are in), they can spin webs in Pithus and Crawlerling forms (those in the Pithus form are preternatural strong), and in all forms other than homid they have multiple pairs of eyes and limbs.

Unlike most other changing breeds, the Damhàn have no connection to Luna and so do not possess Rage (and thusly do not normally frenzy). Instead, in addition to Gnosis, they draw supernatural power from the blood of humans and animals. They are able to use this blood to heal themselves, move with superhuman quickness, instantly change forms, create webs (required in Pithus form) or even to power some of their gifts. They do not regenerate the way the Garou and other Fera do, instead they heal with the power of their blood or or naturally over time like humans do; similarly they do not possess the same immunity to disease that the other shifters have, but they can purse diseases from their systems using the power of their consumed blood. Additionally, they do not step sideways to enter the Umbra; instead, they "crawl though the strands of the Great Web" in their Crawlerling forms (see below); as they are tied to the Weaver, this is easier for them in areas of high Weaver influence and more difficult in areas dominated by the Wyld or the Wyrm (effectively inverted from the way the Garou and other shifters interact with the Gauntlet).

Ananasi are generally considered alien and bizarre (or worse) by the other Changing Breeds; in return, the Damhàn often view the "Ovid" (as they collectively refer to the Garou and other Fera) as being beneath their notice. Ananasi possess no vulnerability or allergy to silver (perhaps because they are not related to Gaia), nor is there any other substance that they are vulnerable to as a Breed. They often point this out as proof of their superiority to the Ovid.

Aspect: The subset of Ananasi determined by which part of the Triat the werespider is dedicated to. The aspects include: Hatar (the Wyrm), Kumoti (the Wyld), and Tenere (the Weaver). Similar to tribes among the Garou.

Crawlerling: The natural spider form. Ananasi can separate themselves into a mass of normal-sized spiders, and then regroup into one of their other forms at a later time.

Faction: The given role that each of the Ananasi follows. The factions include: Myrmidon (Warrior), Viskr (Wizard), and Wyrsta (Questioner of the Way). Similar to auspice in the Garou.

Great Web, the: The universe as a whole. It is no longer perfect, and that imperfection is what the Ananasi seek to repair. Different than the Web or Web of Ananasa (see below).

Ovid (OH-vid): The other Changing Breeds, mostly considered by the Ananasi to be insignificant compared to their own place and duty.

Queen Ananasa: The creator of the Ananasi and the guiding force behind everything they do. She is both their Spirit parent and their totem.

AKA the Great Mother and the Mother-Queen.

Symmetry: The ultimate goal of the Ananasi and Queen Ananasa: the restoration of the Triat to their proper places and eventual restoration of universal balance.

Tapestry, the: Proper perspective on the universe. According to Ananasi thought, the universe is made of endless strands; only by observing the whole of this grand Tapestry can any creature understand its proper place in the Universe.

Unweaving: Deliberate alteration or destruction of a part of the Tapestry or Great Web, in order to restore Symmetry.

War in the Heavens: The great battles that led to the fall of the Triat and the building of the Web.

Weaving: Deliberate alteration, restoration, or creation of a part of the Tapestry or Great Web in order to restore Symmetry.

Web, the: The Gauntlet. While this is a hindrance to most of the Ovid, the Ananasi use the Web to serve their own purposes. Different than the Great Web (see above) or Web of Ananasa, below.

Web of Ananasa: The connection and political body of the Ananasi as a whole. The entire race of Ananasi as relates to the great scheme of the Mother-Queen. 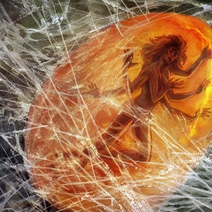 Although rank among the Ananansi is significantly less formalized than among many of the other changing breeds, it does still matter. There is no law that those lower in rank must respect those higher, or vice versa, and there is no formalized command structure. That said, rank does, at least to a degree, reflect favor in the eyes of Ananasa, and as such, those Ananasi of higher rank are normally accorded a greater degree of respect and expected to lead when the Ananasi come together for common purpose, and likewise gain access to higher level gifts. The Ananasi do not have formal names for their ranks, but they do bear visible marks to show it. In human form, these marks show in the arrangement of pores on the skin, while in their nonhuman forms, it reveals itself in a pattern that is visible on the carapace and around the eyes. In all cases, the pattern is part of the texture of the skin or carapace, not merely the coloration of it. 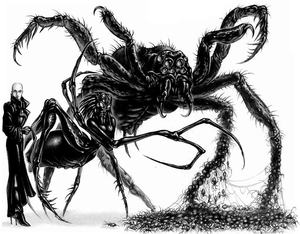 Ananasi generally have four forms (homid, lilian, pithus, and crawlerling). Shapeshifting into any of them requires a Stamina + Primal Urge roll vs a difficulty depending on the form; Ananasi can always assume their breed form without a roll and can spend a blood point to change to any form they wish without a roll.

No stat modifications for this form.
Difficulty to assume this form is six (6).

The Ananasi do not travel to the Umbra in the same way as other Ovid. Rather than finding a spot where the Gauntlet is weak enough and staring into their reflections, the Damhan must assume the Crawlerling form and quite literally crawl between the strands of the Great Web. Once they have entered the Umbra, the werespiders may once again assume any form they desire, but for the Ananasi there is no other way to reach the spirit realms.

The difficulty for entering the Umbra depends on the strength of the Gauntlet, but inversely so; places where the Wyld is still prevalent actually cause the werespiders more trouble than places where the Weaver is strong. The Great Web is their only way of gaining access to the Umbra, and where the strands of that Web are fewer, it is more difficult to enter the spirit world.

The exception is that places where the Wyrm is strongest, whether those of low or high Gauntlet, cause greater troubles for the Damhan. In such places, the corruption along the Great Web is sticky and difficult to navigate (except for the Hatar, who have a natural affinity for the Wyrm's places of power). In such places, non-Hatar Ananasi are at +2 difficulty to "crawl sideways."