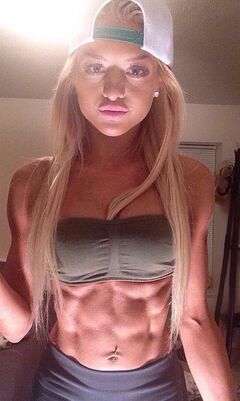 "Dude, did you hear what the tall Norwegian chick did at the party last night?"

Siri is an excruciatingly youthful Norwegian student that has arrived in Prospect to study nursing at UCP. She stands out with an extreme height of 6'6" thanks to her Scandinavian blood, but augments an almost angelic natural beauty with an obsession with fitness, weightlifting and sports - resulting in some serious shred! Her passion has led to her achieving some fame as an Instagram and Youtube fitness model and influencer.

A childhood upbringing in a Catholic orphanage has left her with a faith, but also perhaps a little frustration. The Norwegian state did well by her, but bouncing between Catholic establishments has led to her wishing to rebel a little upon arriving in a more secular educational opportunity like UCP. The girl has developed a desire for experimentation and pushing the boundaries of what life can offer her, and has perhaps developed a reputation for being somewhat of a wild girl. Unfortunately, this has led to her being taken less seriously when it comes to her studies and other 'day time' interactions. Yes she likes to party, but she can also recite myotomal distribution and the nerves that innervate them from memory!
Hellooooo, nurse! Not quite! She studies at UC Prospect as a nursing student with aspirations!

Alpha Sister! A member of the Alpha Sigma Sigma Sorority Chapter, Siri is on the hunt for potential new pledges. Warning: large amounts of debauchery cannot be excluded.

Orphan No family to speak of, but certainly not alone.

ID, Please Despite her towering height and muscularly toned body, her face confesses youth. She barely looks her age, and definitely doesn't pass for older. This definitely causes problems when the legal age for drinking is 21!

No Pain No Gain! When she's not studying or partying, she's hitting the gym. Siri works hard on her body and it definitely shows. Perhaps you've seen her in the gym?

Badonkadonk An ass so perfectly toned and spectacular that it gets its own hook! Squatting is her religion, and the results truly are a miracle.

Aren't You Cold? An impractical dresser (see: flaw), Siri tends to dress rather risqué. Gym is a major part of her routine, and she is often dressed in incredibly revealing attire that exposes her toned flesh to masses.

#Insta #Fame Siri has found some fame as a fitness model on both Instagram and YouTube. Perhaps you follow her or are a subscriber? Maybe you watch her squat videos, but not for the tips and techniques section?
Blair - Super friendly. Helping the Sorority with his DIY skills.


Cheree - I miss you.
Hardy - Seems to be a gentle giant. Taller than even me.
June - Nice guy. Asked for a few workout tips.
Keeley - Strange as hell, but I like her. Beautiful hair.
Kelli - A total minx.
Lisde - Super cute, but total jailbait.
Sasha - Everything so perfect. But why do I feel so tense in your presence?
Synesis - OMG I can't believe I met you!
Xiu - What ARE you?