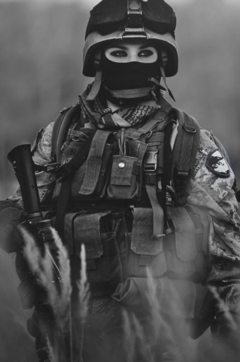 "Unknown. A violent streak at school -- seems she was a bully. Conscripted into the Israeli Defence Force at eighteen, and then... nothing. Most likely Mossad, special forces and then-- anyone's guess, until she touched down on US soil."

"Nothing else substantive, but there are whispers of her now working as a soldier of fortune for the highest bidder. I've been told her services can be incredibly personal with good investment."

"Well, there is one more thing..."
Musclebound Amazon - 6'6" and stacked with muscle. Intimidating.

Norwegian-Israeli - A strange and exotic accent. Hebrew is her first language, though her appearance is more Scandinavian.

Mother - Single mother to a 13-year-old girl. The school run is anything but dull with her attendance.

Ex-Mil - Whether it's the way she carries herself, or how she handles herself in combat. She's a warrior.
CLASSIFIED
No pages meet these criteria.
Retrieved from "https://cityofhopemush.net/index.php?title=Danielle&oldid=225548"
Categories: