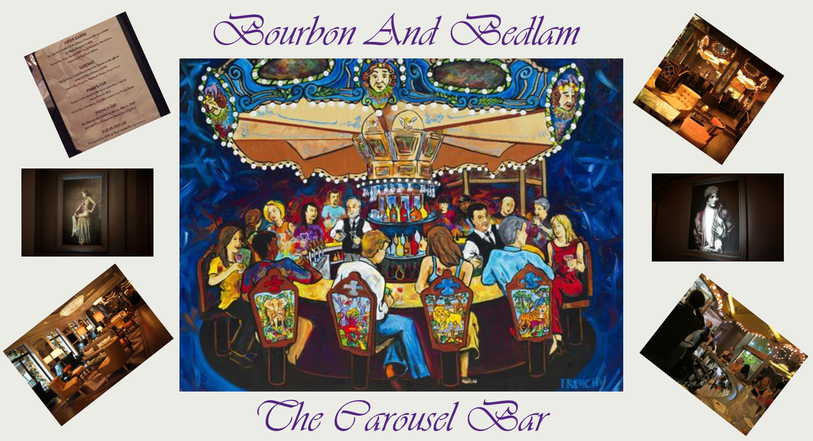 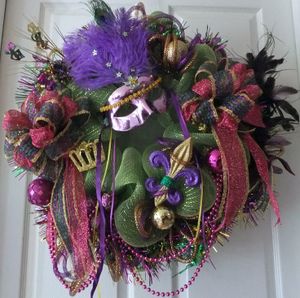 The goal of Bourbon And Bedlam is to bring to life the essence of the New Orleans experience to Prospect. To this end, we are proud to present an homage to The Carousel Bar, one of the most popular in the French Quarter of New Orleans. Fine music, good company, and excellent cocktails are a hallmark there, and so it shall be here. The Carousel itself has been lovingly reproduced with the same design work, craftsmanship and materials as the original that sits in the Hotel Monteleone. Sitting 25 at the main bar itself, we invite you to come and take a ride on the Carousel while you enjoy your delicious cocktail, and delight your ears with the music that is often live on the stage in the lounge area. Or enjoy a game of billiards, while you awaken your palate with a bit of something from the kitchen of Vieux Carre (a limited bar menu available).

The Carousel is the first thing that you see as you step through the doors.[2] Instead of animals to sit and ride, it is comfortable high backed stools with colorful artwork on the back of them of various animals, arranged in a complete circle around a large bar with an impressive looking, multi-lighted and mirrored carousel top on it. The bar's rounded counter turns a full 360 degrees on average speed every 15 minutes. It gives the customers sitting there a ride as they watch the mixologists create amazing delicious cocktails, as well as being able to view the various artwork, and all angles of the room as they ride, and enjoy their drinks. [3]

The mixologists within the donut-shaped center have manual control over the Carousel's lighting, and speed, as well as the ability to turn it on or off. Perhaps you will arrive in time to see the famous shift change, when the bartenders show their individual methods of getting over the bar counter, as there is no other way to get to the inside of the Carousel except by physically going over the counter top. Serveral of the bartenders have very theatrical, or acrobatic entrances and exits.[4]

Designers Lindsay Broad and Ashley Wilkins, in researching the history of the Carousel Bar, were intrigued by the many starlets that would visit Hotel Monteleone during movie premieres at the nation’s first motion picture theatre, VitaScope Hall, on nearby Canal Street. They found black and white photographs taken by Alfred Cheney Johnston in the 1920s and 30s of the Zeigfeld follies and came up with the idea of beading on top of the photographs printed on canvas, to add a 3-dimensional effect and elude to the beads worn during Mardi Gras.

Each hand-beaded photograph stands 3-4 feet tall and glimmers in the space as it catches light shining from the revolving carousel. These pieces, along with the carousel, are able to stand out in the space thanks to the designers using an elegant herringbone wood floor and a subdued grey-taupe color on the walls to help balance these stunning features. [5] [6] [7] 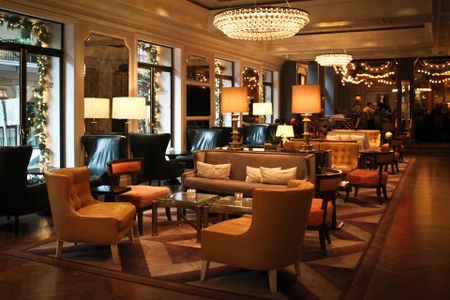 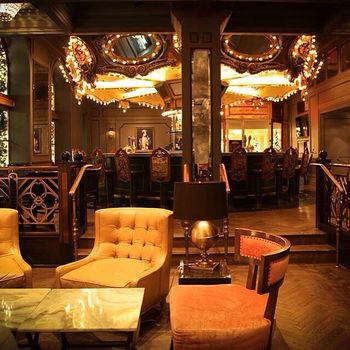 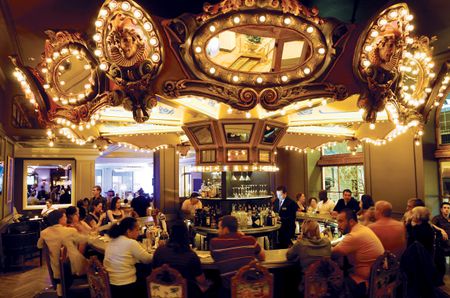 Phillipe and Adrien, your Carousel Mixologists 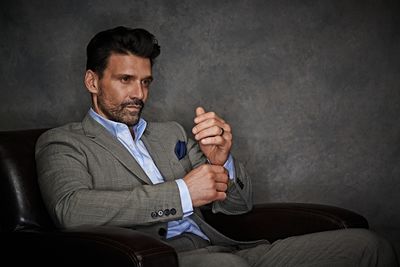 For Vieux Carre and the Carousel Bar
'

Characters who have flaws that have an aversion to bright lights or mirrors should be aware that both are present in the front area of room. There is an entrance from Vieux Carre that comes out into the back area of the room, near the stage, where there are no bright lights, mirrors, or reflective surfaces.

Should you chose to sit somewhere other than the Carousel there are several waitstaff, both male and female, working the floor of the bar and lounge area in assigned sections so that no one is overlooked. They are all dressed in black pants, white shirts, and black vests. After sitting down you will find Cocktail Menus are available at every table, as well as online if you visit the website, or you may chose to use the app available on your cell phone to make your orders, or the Ziosk tablets you will find within easy reach in the various sitting areas. You will find the wait staff pleasantly attentive to your needs, so please tip them accordingly.

We are proud to offer our specially built Venue Room for your next celebration.

We offer full service catering and bar services, even help with entertainment with a live band. Please contact us for more information.

"Take out of this world the men who have drunk, down through the past, & you would take away all the poetry & literature & practically all the works of genius that the world has produced. What kind of poem do you suppose you would get out of a glass of water?" ~ Clarence Darrow, quote from 'Verdict out of Court.' 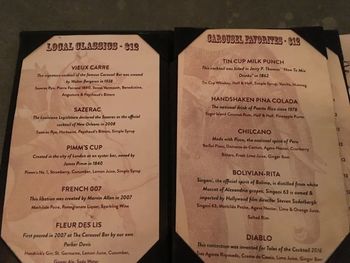 This signature cocktail of the famous Carousel Bar was created by Walter Bergeron in 1938.

The Louisiana Legislature declared the Sazerac as this official cocktail of New Orleans in 2008.

Created in the city of London at an oyster bar, owned by James Pimm in 1840.

This libation was created by Marvin Allen (mixologist Carousel Bar) in 2007.

First poured in 2007 at The Carousel Bar by our own Parker Davis (mixologist). 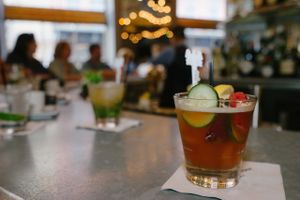 The national drink of Puerto Rico since 1978.

Made with Pisco, the national spirit of Peru.

This concoction was invented for Tales of the Cocktail 2016. 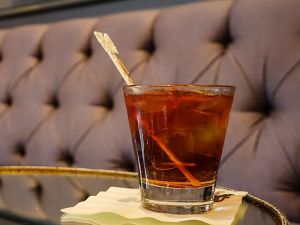 A tribute to Reverend Stiggins from the 'Pickwick Papers' by Charles Dickens whose favorite drink was pineapple rum.

Prior to 1870, cognac was the preferred spirit in this Crescent City classic.

Crafted in the Carousel Bar for Tales of the Cocktail 2016.

Believed to have been first poured at the popular Harry's Bar in Paris just after World War I. 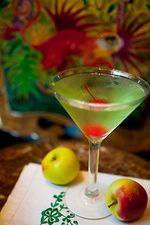 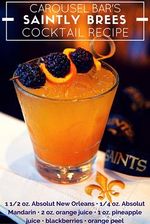 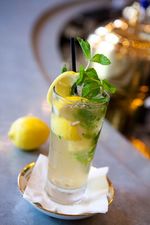 Suisse absinthe from what is known as the birthplace of absinthe. Kubler is clear till it produces an opaque, milky, white louche. This absinthe is distilled from Suisse wheat including lemon balm, star anise, and Roman wormwood. 106 proof.

A famous Suisse le bleu absinthe. Clear in color and one of the smoothest of all absinthe. Made in Switzerland, the birthplace of absinthe. 106 proof.

Austrian absinthe with an earthy green color. This is a Bohemian style absinthe which means less anis. It has aromas of gentian, angostura with hints of mint. 120 proof.

A French absinthe that was one of the most popular absinthes before the ban of 1912 in the U.S. Now, after 95 years, Pernod makes it’s comeback as a quintessential absinthe. Made with fennel, anise and grande wormwood. 136 proof.

French absinthe with a bright green tint. This absinthe is nicely balanced with aromas of wormwood, mint, anise and lemon balm. 138 proof.

A French absinthe with a clear, bright green color which is an indicator of fresh Wormwood. Nouvelle Orleans has an intensely herbaceous and floral bouquet of mint, anise, lemon balm and verbena. 136 proof.

A French absinthe, Lucid is the first genuine absinthe to gain approval for legal distribution in the U.S. since 1912. The absinthe is light green colored and flavoured only by the natural ingredients; green anise, grande wormwood and sweet fennel. 124. proof 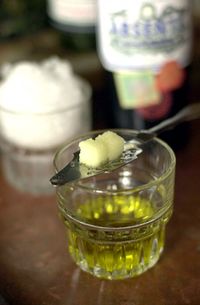 Due to the French influence of the Crescent City, “Absinthe” achieved a wide popularity in New Orleans as well. It was consumed by people from artists and musicians to Storyville madams. Around the turn of the twentieth century, there was observed a subset of alcoholism referred to as "absinthism". It’s effects, despite popular conception, are not due to the wormwood (Artemisia Absinthum) alone, but to various herbs, most of which contribute in one way or another to its intoxicating effects. By 1912, in New Orleans, as well as in the rest of the United States, Absinthe was banned; being classified with opiates, cocaine, and marijuana because of it’s unique intoxicating qualities. Later years the USDA and FDA regulations also ban the sale or importation of any beverage containing wormwood. After it’s banning, many formulas using anise and other legal herbs appeared in modern commercial Absinthes. In New Orleans, one of the most popular is Herbsaint, a locally-made anise liquor, used in cocktails, like the superb local Sazerac; and cooking. Also it is very popular the French version “ABSENTE”, which contains the same ingredients, like: Angelica, Anise, Peppermint, Star Anise; with the difference that the Wormwood is replaced by a less bitter one, called Southern-Wormwood or Petite Absinthe, native of Mediterranean countries and warmer regions of North America. This wormwood contains minimal levels of Thujone, the natural chemical compound of wormwood, allowed in the United States. Also this formula has an alcohol content of 55% alc/vol (110 proof), and was the first allowed in the States after the ban.